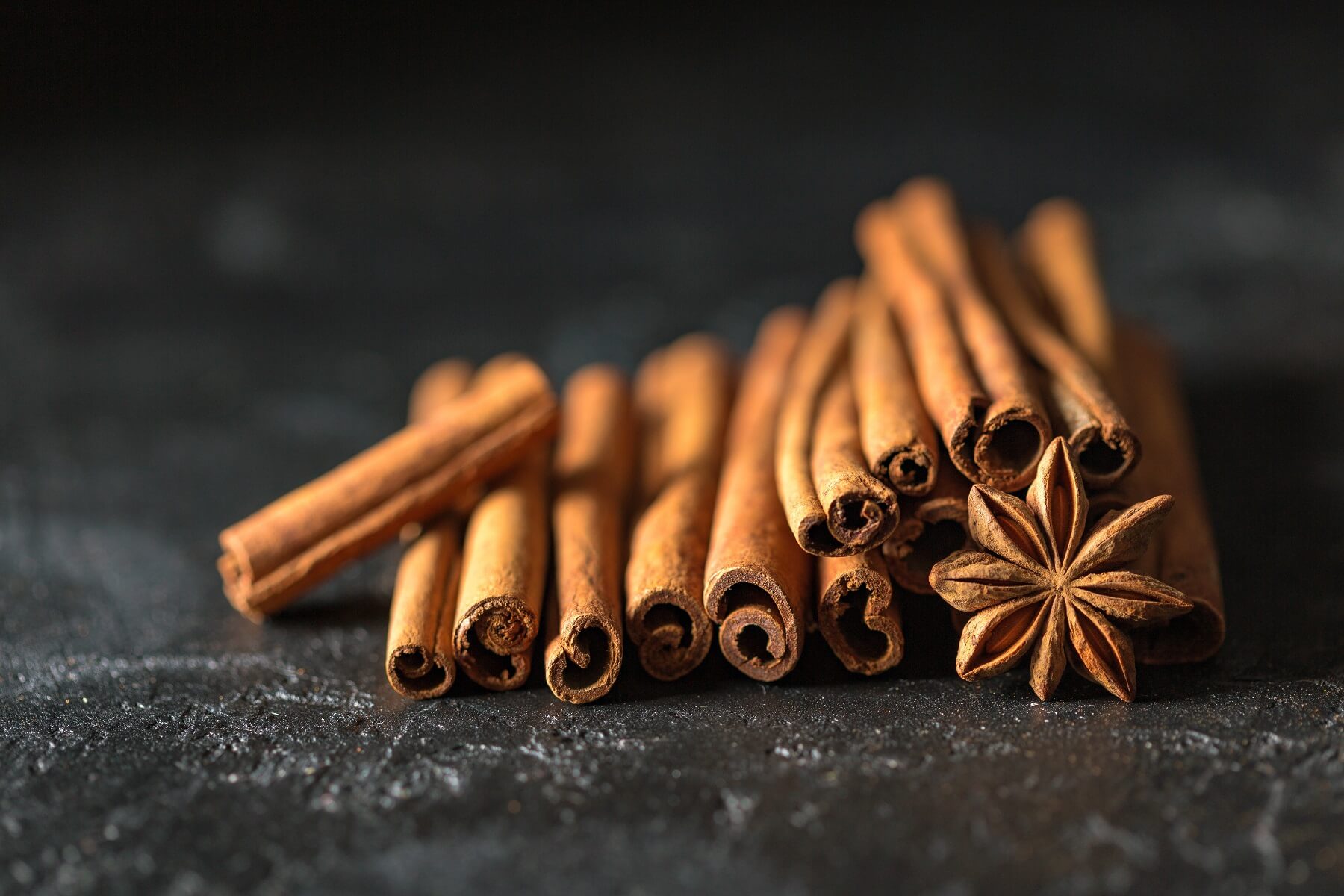 9 Ways Cinnamon Can Benefit Your Skin

One great thing about cinnamon is there are so many ways to use it – cinnamon oil, powder, mask, etc.

Cinnamon is proving to be a spice that not only adds flavor to various dishes but can also cure many infections and diseases.

Cinnamon Benefits for the Skin
Cinnamon has been used for centuries in traditional medicines in Asian cultures-Chinese and Indian. Among the various benefits which cinnamon offers, one of the most important is its role in maintaining healthy skin.
In addition to this, it can also help remedy various skin related diseases and infections. Thus, cinnamon can be used in multifarious various to improve your skin.

Here are some of the benefits of cinnamon for skin

Cinnamon is said to improve fine lines by plumping the skin.

This means that using cinnamon can stimulate blood vessels and bring blood to the surface of the skin. Use a mixture of 3 drops essential oil of cinnamon and 2 tbsp olive oil or petroleum jelly. Apply this mixture to fine lines on the skin, taking care to avoid the eyes.

The skin soon plumps out and fine lines become less visible. This can even be done to plump up lips and can be used as an alternate to lip gloss.

Cinnamon can also be used to nourish the scalp. Make a paste using 1 tsp ground cinnamon, ¼ tsp warm olive oil and 1 tbsp honey. Massage this into the scalp and leave on for 15 minutes.

Wash off after this using a normal shampoo. Cinnamon acts like an exfoliating agent to stimulate the scalp and provide nourishment to hair follicles.

Eczema is a condition in which skin gets inflamed and irritated. A large number of medical conditions are grouped under the term ‘eczema’. The most common type of eczema is atopic dermatitis, which is an inherited condition. The exact cause of eczema is unknown, but the most important cause is an overactive response by the body’s immune system against an irritant or allergen.

Eczema can be a very irritating skin condition that leaves behind light colored patches.

Some people have found that using 1 tsp cinnamon and 1 tsp honey on these patches could provide relief.

However, this paste must not be used on the face for it can cause irritation. You are advised to perform a skin test before using cinnamon paste on the skin.

Cinnamon is said to help with treatment of acne and pimples. Mix 1 tbsp cinnamon powder and 3 tbsp honey and apply this on pimples. Leave this paste overnight or for 20 minutes before washing with warm water.

Acne scars could dry out and skin could get rejuvenated.

This paste can also declog pores and bring oxygen and blood to the surface. However, this must not be used more than once a week since it could cause skin irritation.

Cinnamon has antiseptic properties. If you have an open cut or wound, just dust a pinch of cinnamon over it. Bacteria will be killed and the wound heals faster.

A large number of studies have determined the anti-bacterial and anti-fungal properties of cinnamon.

As far back as 1978, a study reported the anti-fungal effects of o-methoxycinnamaldehyde from cinnamon. It was reported that this compound inhibited the growth and toxin production by the mycotoxin producing fungii.

A comparative analysis of the bacteriostatic and bactericidal activity of 13 essential oils showed that the True Cinnamon bark oil had the highest anti-microbial activity.

Another study has shown that Cinnamon essential oils can help combat the infectious agents which are resistant to the traditional antibiotics, e.g. Staphylococcus aureus. In this study, it was found that Cinnamon oils are much more effective as compared to olive and paraffin oils in fighting Multi-Drug Resistant S. aureus.

Thus, cinnamon oils can be used to fight Staphylococcus infections.

Thus, the anti-microbial properties of Cinnamon and its oils have been definitively proven in numerous studies. Since sepsis is an inflammation caused by infection, it can be inhibited by using Cinnamon extracts and oils. Sepsis is a potentially fatal condition which might result in septic shock and multi-organ failure.

Cinnamon used on the skin seems to increase collagen levels for up to six hours after it is applied. Breakdown of collagen causes the skin to lose elasticity and increases signs of aging.

When cinnamon extracts were used as an inducer for skin fibroblast cells, there was an increase in the levels of collagen protein, without any cytotoxic effects.

Thus, cinnamon can act as a safe agent to promote collagen biosynthesis. By carrying out experiments like liquid chromatography and nuclear magnetic resonance, it was determined that the active agent responsible for this up regulation of collagen is cinnamaldehyde.

The intracellular pathway for the synthesis of collagen involves a receptor known as the Insulin-like Growth factor-I (IGF-I). It was observed that upon cinnamon extract treatment, there was an increased level of phosphorylation of this receptor.

This indicates that when cinnamon treatment was given, the biosynthetic pathway of collagen synthesis was activated to greater extent. An enhanced expression level of the various proteins involved downstream of the receptor was also observed due to the cinnamon treatment. Thus, cinnamon can be used as an anti-aging agent.

In a nutshell — Cinnamon seems to increase collage expression on the skin through cinnamaldehyde, its main chemical component. This is able to activate growth factors IGF-1 and improve collagen expression. Topically cinnamon creams could be used.

7. To soften and soothe dry and dead skin

Cinnamon extracts and powder act as very good exfoliants an can be used to remove dead skin cells. This helps to restore the shine and suppleness of skin. Cinnamon can be used in combination with sea salt, almond oil, honey and olive oil.

To treat roughened feet, a foot bath consisting of lemon juice, olive oil, whole milk, water and ground Cinnamon can be prepared. A treatment for 15 mins can effectively soften skin and make the feet smooth.

Another major benefit of using Cinnamon is that it helps to enhance skin complexion. This is due to the anti-bacterial and anti-fungal properties of cinnamon. But I have to add, this is not scientifically established.

For this, a face mask consisting a banana puree, yoghurt, ground Cinnamon and lemon juice can be prepared and applied onto the skin. It should be left until it has dried and then it can be washed with warm water. This helps to improve skin quality and as well as complexion.

Cinnamon is a highly beneficial spice which can be used to ensure various benefits for the skin. It helps to prevent and fight skin infections, eczema and also improves the quality, texture and complexion of skin. Thus, cinnamon powder can act as a very simple solution for various skin related problems.

Cinnamon oil improves blood circulation. By using this essential oil for massages, the nutrients in the skin increases and this improves the tone of the skin. Cinnamon oil made from the leaves must only be used on the skin. Oil made using cinnamon bark usually causes allergic reactions.

Other benefits to the skin

Cinnamon included in foods can also improve skin tone. For example, add a tablespoon cinnamon to various foods in a day can provide us with a good source of fiber. This eliminates waste products from the body. Flushing out toxins prevents them from clogging the skin and improves skin tone.

Drinking a smoothie with a dash of cinnamon powder can fight against bacteria which cause acne and other skin conditions.

Cinnamon powder and cinnamon oil have been found to offer anti-parasitic, antifungal, antiseptic and antibacterial properties according to animal and test tube studies.

Cinnamon could be used to fight vaginal and oral yeast infections caused by the Candida Albicans fungus. It could also be used to get rid of head lice.

Ways to use Cinnamon for Skin

Here are some ways to use cinnamon and other ingredients for the skin. Wherever I mention cinnamon for oral use, please consider it as Ceylon cinnamon.

If you are feeling fatigued, you can try this body wash to recharge your body and make you feel fresh and look younger. Make this inexpensive, rejuvenating wash using 6 teaspoons each of ground nutmeg and ground cinnamon. Filter this, pour it into a warm bath and soak in this until the water cools.

Use the same water to wash your face too. Soak for 10 minutes a day and feel the difference.

Combine together the following ingredients and use them as a scrub.

This face mask can be used to treat acne. It can be used twice a week but with caution. The benefits are got from all three products. Honey offers antimicrobial benefits and can fight acne caused by microbes.

It is also soothing to the skin and is a natural antioxidant. Nutmeg reduces inflammation and redness caused by acne. It can dry out acne and is a safe topical acne treatment similar to salicylic acid or benzoyl peroxide.

Cinnamon can dry out pimples and plump the skin by bringing oxygen and blood to the surface and unclog and open pores by removing excess oil from the skin’s surface.

For the mask, mix together:

Use Ceylon and not Cassia Cinnamon for oral use. This is because Cassia has high % of coumarin which can cause harm.

Cinnamon oil offers many health benefits but used in concentrated form, it can also cause allergic reactions like swelling of the skin, hives, mouth sores and skin irritations in some people.

Hence, people are advised to do a patch test before using cinnamon oil or to use cinnamon bark powder instead for skin infections. The irritation is often caused by eugenol and cinnamaldehyde present in cinnamon oil.

This could cause convulsions and must be avoided during pregnancy.

It could also be an irritant or a dermal toxin sometimes. Some people could experience allergic reactions to cinnamon oil or even develop contact dermatitis.